What are production samples? These are printed titles that are taken from the final production run for our approval. And today, as you can tell by the pics, we received the first wave of production samples. Sabrina will now check all of these and send the factory her feedback.

We Are Running Late

The latest estimate from the factory puts the 16 Pocket Box games as completed and ready next week. The expansions are running a few weeks behind schedule and we won't be ready to start assembling the bundles until early in November. Additionally, we still have to coordinate shipping the completed games from the factory to Austin; we cannot start to schedule the container until we have a 100% final project completion date from the factory.

We are sorry that this is running behind schedule. The task of preparing all of the titles for manufacturing took the factory longer than any of us had estimated, and we've since been behind and not gaining time. At the moment, we do not know if the games will land in Austin in December, or if the entire delivery will slide into January. We will know more in early November.

Delays are terrible and we hate to be late with your games. That said, though, the delays have been so that we can make these as near-identical to the originals as possible. Thank you for your understanding and continued patience. 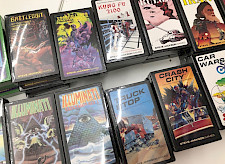